A Democrat and Her Two Republican Friends

I just read a touching article on NPR that instantly reminded me of two special friends, Rob and Steph, both lifelong Republicans. It is about former Democratic Vice President Joe Biden's eulogy of Republican Senator John McCain and of their friendship, which spanned decades.

Rob is, truly, my longest close friend (from the age of six) and one of the most decent, kind, funny, loyal and wonderful men I've ever known. To say he wasn't a fan of Hillary Clinton, well, that would be an understatement! But he is my friend and I love him like a brother. He loves me like a sister too. The night of the inauguration, knowing how hard I had worked to elect Hillary and keep Trump out of the White House, Rob sent me a text that defines our friendship and his character.

It said "Hey doll, I know you're hurting tonight and I just wanted to let you know that we are thinking of you and we love you."

Gulp. His short and sincere note was the most thoughtful thing anyone has said to me regarding my election efforts and he didn't even want my candidate to win. He just knew that I was in pain and he reached out. I still get choked up thinking about that text.

Steph would've been my Republican opponent for the KS Legislature in 2012 had she been successful in the primary. We had coffee after the primary, and a connection was formed which still remains six years later.

We are both married to men named "Brian."

We are both madly in love with dogs.

We both experienced traumatic early childhoods.

We both push ourselves by entering various races/runs and, while neither of us is the fastest, we sure keep trying.

And we both deeply lament the fracture between members of both parties. On the rare occasion we are able to get together for a glass of wine, we laugh, catch up, and share frustration that results from witnessing conflicts and flaws within each of our own respective parties and some of their various characters. We've even discussed creating a way to show our community that two friends from opposing parties can listen to the other side and CAN come up with practical solutions. 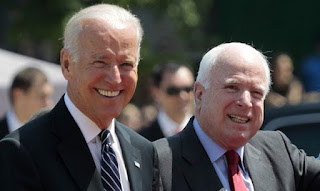 Because, let's face it, as humans we are all flawed. And lest you get the wrong idea, I disagree with Steph and Rob on many policy issues (and they with me) and our personalities are different in many ways. I kind of LIKE our differences, though (I'm chuckling because both have tempers and I could use a little more fire myself). None of us is what anyone would ever call an extremist (not by sensible standards). And, honestly, I think this encompasses the majority of Americans.

Are there extremists? You bet, and both of my friends are concerned with that as well. You see, we agree on the basic fundamentals, just have opposing ideas on how best to make them happen.

And as humans, flawed though we are, we have the capability to listen to each other, humanize each other, respect each other, and to work together IF WE CHOOSE.

As American citizens we could learn a thing or two from them.

Thanks Rob and Steph.

And thank you Papa Joe for reminding us that treating each other with respect and working together for the greater good is something that can be done. We just have to ignore the outside noise, listen to each other, and give a little.

Posted by Gemini Journey at 8:51 AM No comments:

Gemini Journey
I'm a "Double Gemini". That's like having double multiple-personality disorder. From childhood stories (I was once cut open with a broken beer bottle by a fellow four year old)....to life in a RV Park in Richmond VA (the old Confederate capital)...to a psychotic and damn near debilitating obsession with KU basketball...I'm what you might call a complicated person. Join me on my journey and maybe share a few laughs and tears. After all, ain't that life?